REVOLUTIONARY ARMY OF THE INFANT JESUS
THE GIFT OF TEARS 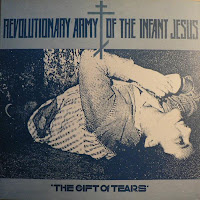 “Mystery”, “whimsy”, “confusion”, and “otherness” are all words that could easily be applied to the strangely-named Revolutionary Army Of The Infant Jesus (indeed, if the name alone made you roll your eyes, you may just want stop here).

The Liverpool-based RAIJ is often lumped in with the rest of the “apocalyptic/experimental folk” genre, alongside groups such as Current 93, Death In June, Sol Invictus, and The Moon Lay Hidden Beneath A Cloud.

Like those artists, RAIJ’s music is a blend of folksy, acoustic instrumentation, cryptic lyrics full of sacred/apocalyptic imagery, and trance-like vocals that seem more like invocation. However, the band also incorporates ambient and industrial sounds a la Les Joyaux de la Princesse, as well as plenty of samples from European films (Andrei Tarkovsky and Jean Cocteau seem to be as big an influence as anything), old Russian speeches, and tattered radio broadcasts.

This record is easily one of my favorite albums of all time. It's proof of an unjust world that this album has scarcely been available over the past ten years. Except those rare copies offered at prices of an arm and a leg.

Eschewing economics, the beautiful music of RAIJ has bucketloads of passion, mystery, innocence, and is rife with an adventurous spirit of experimentation. You can literally hear the joy in their musical discoveries, from track to track. In it, you'll hear a valid attempt invoking the spirit of Europe: From otherworldly Gregorian-style chants to madrigal acoustic guitars/flutes to echo-chamber percussion and floating electronic soundscapes, even excerpts from Cocteau's movie ORPHEE. That is, a musical journey from medieval times to our electronic era. And it's breathtaking to hear such imaginal leaps through their sound.

It wouldn't be too off the mark to consider their music in the "apocalyptic folk" tradition of, say, Current 93, Death In June, etc. And like this style, it takes acoustic instruments and collides them with electronic manipulations. But this collision is done in a way that is totally singular and without peer.

rapidshare is being very strange. it has some thing about cats and there arent enough spaces in the form for the letters with cats. whaa??

none of my comments are showing up. but i just left one about rapidshare being stupid, and the thing is, zshare wont work either. could you do mediafire?

Your Blog has added to
The Music Blog Roll

in the Category:
Electronic

Is this Alright? If Is not then let me know

plz put a back link on your blog
Our grab the Badge from
http://musicblogroll.blogspot.com/

and mybe would you like to sign in en joy, The Great, Big, Free, Music Blog Web Ring:
http://musicblogwebring.blogspot.com/
Thx

no, i can't even get the file. rapidshare still wont accept any code i put in, and zshare pretends its counting down until the download link will appear... and then sends me to some ad page, then ends up blank.
I really cant get either to work. Mediafire or yousendit... would be great

Sorry, folks.
Has anyone had the problem that WORSTWARD is experiencing?
Let me know through the blog, please.

This sounds delicious so far.

No problem at all downloading.

For people who've been having trouble with zshare: you need to be patient, sometimes try a couple times. Once you get the hang of it it's easier.

I had no problems with Zshare. Rapidshare has recently done the wrong code-thing couple of times to me as well, but it works normally after few attempts or a refresh.

Yeah, this album is great. I had no high expectations though reviews were promising, but now I want more. :D

I had no problems downloading, I used the zshare link.

This is cool stuff, thank you! Interesting band name too, I admit that's the main reason I decided to take this one, haha

I'm so happy you all, guys, are enjoying this obscure gem.
Thanks Craig for donating this.

Sometimes it reminds me of SPK's "Zamia Lehmanni", another album that I REALLY love.

quote: "rapidshare is being very strange. it has some thing about cats and there arent enough spaces in the form for the letters with cats. whaa??"

The thing with the rapidshare-code is, you have to figure out the letters with the cats (there are in my case four with cats, and two with dogs) - for me it worked fine.

Thanks margot, I often read about this gem now it's mine ;o)

>I'm so happy you all, guys, are enjoying this obscure gem.
Thanks Craig for donating this.

You are most welcome , Lady Margot. (I found the original LP in the punk 'bin' at a local used record store (back in the "dark-ages",... before eBay), and was beside myself w/ glee....
The CD RE adds just one of the EPs
ALL of their work (2 LPs / 2 EPs) should be exposed to the widest audience . It`s absolutely wonderful stuff .

>Sometimes it reminds me of SPK's "Zamia Lehmanni", another album that I REALLY love.

yes, INDEED! I can see/hear why you`d say that

I have other things in this direction... when I come across them , I`ll LYK
~C

thanks so much for this, it is excellent!!

if you still look for Tamia,here is Senza Tempo from a nice blog :

Thank you very very much, Jeloca.
I can't wait to listen to it!
I was looking for TAMIA for ages :)

Fantastic post. Thanks so much. As I said in my email, I just about wore out a cassette copy of this back in the day, so I'm delighted to hear it again. Thanks for this wonderful site.

Thanks for turning me on to this! I really dig it! Keep it up!

this is excellent stuff. thank you

WHERE IS THE LINK.