MOON LAY HIDDEN BENEATH A CLOUD (THE) 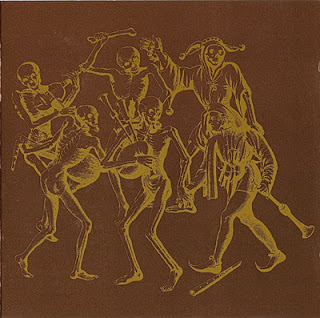 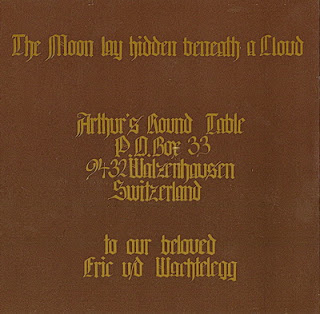 This is the second Moon Lay Hidden album, and it picks up right where their debut left off. The songs are sort of medieval, neo-martial trance. The anger and brutal honesty regarding Europe's history is still taking shape, but the instrumentation is awesome.

As always, the tracks are untitled. The songs have a cinematic feel, like a soundtrack for the Black Plague. Tolling bells, monastic choirs, film dialogue, and Alzbeth taking all the romance and whimsy out of the Dark Ages. The livelier tracks would fit right into Monty Python's "The Holy Grail."

Sometimes the lyrics are hard to make out. I recommend snagging a copy of "Alzbeth: The Book of Lyrics." It gives the translations where needed, and provides ALL the background on why The Moon Lay Hidden Beneath a Cloud has such a chilling style...many of their songs are little history lessons. Track 20 is a glorious war anthem, a strong climax for the album.

If you're a fan of Der Blutharsch, you'll wonder why his work in Moon Lay Hidden is better than his solo work that followed. As far as I know, Alzbeth hasn't released diddly-squat since TMLHBAC - guess she chose to get out at the top of her game. "Amara Tanta Tyri" is a good introduction to their legacy. Where Swans had that Bodies-in-the-Bayou style, Moon Lay Hidden reached into the past and unearthed just as many.

Thanks my Lady,
I don't have and I don't listen this great album until now! Thanks again,
Graaf

Thanks a lot, Graaf!

I have all the original TMLHBAC albums and this one is my favourite :)

Well, after the bunch (4 Albums, 4 EP's, 2 singles and 3 boots) of TMLHBAC, my lady Margot you are right - this is my favorite album too.
Thanks again!
pozdrav, Graaf

What do you think about, Graaf?

It’s good choice Margot, please listen another track 4 from EP - Were You Of Silver, Were You Of Gold – 1996, it is very interesting version of old Bosnian love song, totally contrast with the rest of their repertoire! You love it.
Pozdrav, Graaf

Excellent one, Graaf.
I gave a spin to my clear vinyl right now :)

Without doubt you know my tastes very well at this point

Pleasure is mine, Thanks to you!

Hi Margot, since there seems to no other way of contacting you...I would love you to hear the new Hills! Werewolves! Run! album. I hope you like it.
http://treehouseorchestrarecordings.blogspot.co.uk/

i really love what you are doing with this blog. I've long been interested in the possibility of posting music that is pertinent to the seasons, the air, like plucking out a soundtrack that was always there, that maybe other people might not hear. Interested in hearing these records!