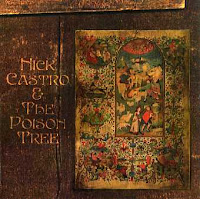 Nick Castro hails from Los Angeles, a city whose glitter and glare would seem worlds away from anything as comfortable and worn-in-feeling as Further From Grace. The acid folk-meets-Renaissance Faire aesthetic behind most of Further From Grace recalls medieval Britain more than modern La-La Land... but that's not nearly as dorky as it sounds. Castro and the Poison Tree (featuring members of Philadelphia neo-folkists Espers) are utterly convincing -- they seem contemporary, but never allow a breath of indie-rock pretension to steal into their sumptuous balladry. "Sun Song" opens the disc in fairly traditional troubadour style, with mourning cello and narrative steeped in the dark and supernatural. Soon it dissolves into a gentle melee of undulating flutes and choirlike singing (courtesy of underground folk luminary Josephine Foster). And that's when Further From Grace gets its hooks into you.

Castro's rich voice and gift for lyrical imagery find a comfortable home in Further From Grace's beautiful arrangements. The yearning, flute-like tune that decorates "To This Earth"'s introduction is echoed by the vocal melody, lending extra poignancy to the already evocative lines, "Her hair was red like the blood which she caused to flow through my heart / Her love was so pure, like a little bird in the sky / Flying right towards me, she's my one desire." Of course, Further From Grace has its share of clichés like "Her skin was white as snow", but the storyteller's empathy in Castro's delivery keeps them from sounding hackneyed.

Not all of Further From Grace follows the minstrel formula, though; Castro's 2004 debut wouldn't have gotten so much attention if he were afraid to experiment a bit. In the wordless "Waltz for a Little Bird", Adam Hershberger's mellow flugelhorn replaces the vocal with a wistful, rather circus-like melody, later reprised by guitar, over plonking piano. Placed at the album's approximate midpoint, the track functions almost as an intermission, signaling departure to regions less "folk" and more "acid". "Music for Mijwiz" primarily features the Arabic "double clarinet" of the song's title, working up to a rambling, multitonal buzz against complex hand drumming patterns. In "Deep Deep Sea", the flugelhorn once again takes center stage -- now moaning a wistful boat-whistle, now effortlessly running up and down the scale. A long, jammy interval shifts abruptly -- with a crisp bell tone, no less -- into delicate guitar picking, a fit transition into "Walk Like a Whisper", the album's slow, dreamy conclusion.

Further From Grace is an ambitious record. The studio artistry, the large number of musicians and instruments, the hodgepodge of styles -- all self-consciously demand notice and respect. But Further From Grace is also humbly built on the things that make great albums what they are: solid songwriting and arrangements, good lyrics, impeccable performances. It not only deserves your admiration, but a place in your CD player.

Anonymous said...
This comment has been removed by a blog administrator.
February 25, 2010

Such a nice post, it is really interesting, want to admire your work, Thanks.