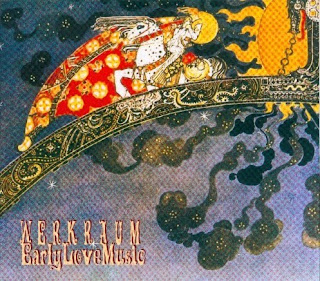 Werkraum have completely shed the subtle martial spirit they showed in their first recordings and have moved deeply into folk. ‘Early Love Songs’ is the perfect collection of popular songs, troubadour notes and contemporary storytelling.

It actually reminds me much of a jumpy, epic yet close Jethro Tull that moves towards psychedelia instead of hard rock in its variety. Axel Frank counts on many collaborators for this record: Nick Nedzynski (Lady Morphia), Nicholas Tesluk and Robert N.Taylor (Changes), Antje Hoppenrath as well as Hajü, Herr Wind and Max Percht (from Sturmpercht) . Also, as homage to previous folk singers, ‘Early Love Songs’ includes to revisited versions; Donovan's Lewis Carroll poem in music ‘Jabberwocky’ and Steeleye Span's ‘The Blacksmith’.

There is a conglomerate of voices, especially in those songs sung by male ones, where the lively composition comes alive – where one can imagine the musicians together, relaying the voice to one another, in an organic, harmonious collectiveness. ‘Ein Lied von Lieb und Treu’ moves into a more neofolk feeling, where the wind instruments move through the song underlining the voice and swirling around the guitar. The structure is free, repetitive, rooted into the quality of music storytelling – a verse structure repeated into memory with an emotional quality to it, resulting in an extremely beautiful composition. ‘Die rechte Braut’ presents a similar structure, but in a more populistic way, with voices, flute and chords mingling together. ‘Santy Ano’ modernizes the folk song into a popular sound, with an almost western-like inspiration. Can you imagine what music would accompany a cart line, after hours of dusty road? This is it. Melodic voices, matter-of-factly emotive lyrics, crazy instrument uprisings. ‘The Dream’ might be one of the most psychedelic themes of the record. The undulating instruments come together with the partially singing – partially reciting voice. Synths and percussion mark the rhythm and, when you are being caught up in the composition, it becomes extremely short, feeling as though it could’ve gone on forever. ‘Beyond the Evening Star’ is a contemporary work of jester – a modern minstrel that tells a tale over groovy music, with a dark enticing voice and a quasi-jazzistic approach. It is followed by ‘The smiling of the rose’ which takes the music like a glove, almost as a continuation of the previous song. Then it develops, with a progressive, psychedelic use of bells, percussion and lingering voices.

In numerous songs a female voice takes over (‘La Marmotte’, ‘Slâfest du, vriedel ziere?’, ‘Der Schmied, ‘Une Jeune Fillette’’. The first one mentioned has a progressive feeling to it combining guitar arpeggios, harmonious, drum work and flute, as well as several chorus voices. The instruments mostly follow one another in an orderly, sensitive manner. The second female song is a ballad, full of longing and intimacy yet the third walks into the psychedelic folk path, with a fluctuating guitar work and a remarkable work in second voices, becoming the most prominent female song in the record, from my point of view. The last female song is ‘Une Jeune Fillete’, with a very medievalist approach. The song is constructed over violin and short, sharp guitar sounds.

‘Song for Erik’ is supposed to be the epic song of the record. It counts with an overture, where guitar and wind sound break into a superb arpeggio. The composition presents a master work in guitars, combining and flowing around other instruments while the voice sends a mantra over to the hero. The song is interrupted by sounds, vibrations, crisp energy, as if the air had gotten electrified before the storm. Is if perhaps Halfdan approaching? Or the stars shinning above a chosen one? ‘Allgemacht’ recuperates the sort of grandiose troubadour, graphic composition one can hear in ‘Song for Erik’ but even closer, more direct, and, regrettably, too short. ‘Sanctity and Steel’ closes the record moving again into a more modern style (such as ‘Beyond the Evening Star’ anticipated). It is the newer version of folk song. Pseudo rock n’ roll and flute lines. Tambourine and torn stories. Werkraum can do both, as they please. From classic to contemporary. From popular to unique. Folk in all its aspects.

Have this one on vinyl, great, underrated, album.