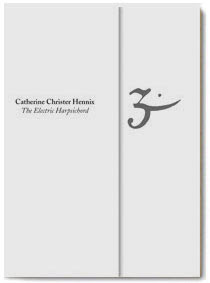 This latest addition to Die Schachtel's sublime Art Series is a largely neglected masterpiece from Swedish-born composer Catherine Christer Hennix, a disciple of LaMonte Young and Pandit Pran Nath during the 1970s. Although her music is largely unknown - even among the experimental music community - those who've been exposed to Hennix's work tend to rank her among the elite of American minimalist composers of the twentieth century.

The Electric Harpsichord (recorded in 1976) is talked about with the highest reverence by the avant-garde's cognoscenti, with Glenn Branca describing it as "a pure perfect piece of music" and "a work of transcendent power". Having embarked on her compositional career in the 1960s studying the techniques of Xenakis and Stockhausen, Hennix's musical bearing was jolted somewhat by the Nuits du Fondation Maeght festival in 1970, where she first encountered LaMonte Young and Hindustani raga master Sri Faquir Pandit Pran Nath. Over the course of the ensuing decade, Hennix would study with both these men, and to many the piece reproduced on this disc is her magnum opus.

Made using keyboards tuned to just intonation and a tape delay feedback network based on Terry Riley's notion of the "time lag accumulator", the piece is a thing of sparkling psychedelic chaos, achieving that magical dichotomy between apparent narrative-shirking motionlessness and eternal flux. For all its droning stability on a 'macro' level, The Electric Harpsichord's continually recombining layers ensure it remains ceaselessly shifting in 'micro' terms. Significantly, none of this gets out of hand and you can still make out the individual pitches ebbing and flowing within the sound mass. Paying close attention reveals some incredible oceanic movements within the sound waves, and repeat listens reap considerable rewards. This recording lasts twenty-five minutes, though in the strictest terms it should be considered as only a fragment of what the composition represents; in conceptual terms The Electric Harpsichord would be an endless, perpetual entity. In support of the music itself, this release comes in a box that opens to reveal a 60-page booklet containing two LaMonte Young pieces written especially for this edition, plus an extensive essay by Henry Flynt (a close friend of Hennix) as well as some illuminating, if highly technical and abstract background text from Hennix herself, who reproduces excerpts from her "notes on the composite sine-wave drone over which The Electric Harpsichord is performed".

This utterly absorbing and highly involved passage is just the thing to show drone music naysayers who think it's all just somebody holding a note for a really long time. An essential release, presented with all due reverence and care by Die Schachtel.

Interesting looking blog. I'd like to hear some of these artists.

Hi, I'd love to hear some the music on your blog.