THE WALL OF SACRIFICE 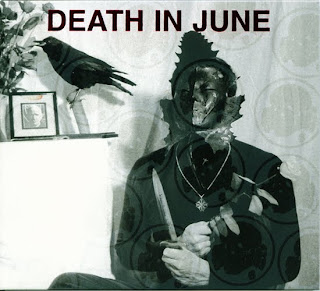 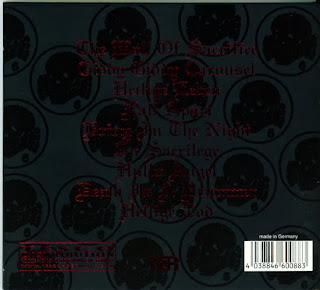 from All Music Guide:

By the time of 1989's Wall of Sacrifice, Death in June was essentially a one-man project, although Doug Pearce is joined here by several collaborators, familiar and new: Non's Boyd Rice, filmmaker and occult author Nikolas Schreck, Strawberry Switchblade's Rose McDowall and David Tibet of Current 93.

Wall of Sacrifice juxtaposes melodic neo-folk with experimental pieces that dispense with conventional song formats. The album is bookended by numbers from the latter category.

The ominous, epic closer, "Death Is a Drummer," is more successful; a hypnotic, droning electronic pulse gives this track a more satisfyingly unified feel as ghostly military music while female vocals fade in and out. The most rewarding material finds Pearce pursuing his apocalyptic folk muse on several sparse acoustic tracks.

The brooding "Fall Apart" and "Hullo Angel" are compelling enough, but most memorable is the beautiful and austere "Giddy Giddy Carousel," which evokes Scott Walker's stirring Europhile ballads -- although Pearce's view is considerably darker than Walker's romanticism ("Europa has burned and will burn again"). While most of this material is either expansive and atmospheric or concise and melodic, some numbers combine the two tendencies.

Although Wall of Sacrifice isn't Death in June's strongest late-'80s album, it usefully maps the different sonic territories Pearce was exploring during that period.

Thank you very much for this share.
Please other "Lammas".

I've been following your blog for so long, and i have your link in my lo too. It is possible to link my blog in your favorites?
http://doubleavenue.blogspot.com/
Thanks for your posts and keep on